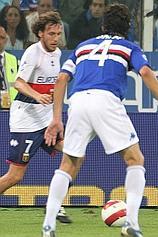 The first derby in Serie A after 12 years ended without goals: 0-0. Genoa did not play in their 3-4-3 system like usual, but with only 2 strikers (Borriello and Di Vaio), 5 midfieldplayers (Rossi, Konko, Milanetto, Coppola and Fabiano) and the usual 3 defenders (Bega, Bovo and Lucarelli). Sampdoria did not gave Omar Milanetto any chance to play his usual role as playmaker of Genoa, so other Genoa-players had to organize the offensive part of the match, which did not succeed very well. Best Genoa-player: Marco Rossi, while it also need to be said that Sampdoria-players acted very agressive and frustrated like Bellucci that kicked Rubinho in the face while our goalkeeper already had the ball in his hands.

In Skysportscafé around 20 Genoani (no ciclisti !!) watched the match together on 2 big screens, while Real Madrid fans had to watch their match against Valladolid on 1 very little screen. Amsterdam solo Rossoblu !