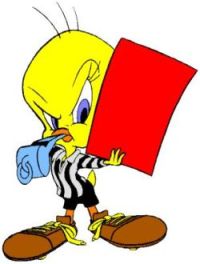 This must be an old picture during the Moggi-period of the referee in the shirt of Juventus. Nowadays it is also possible that a player of Juventus gets a red card. Sunday in the 94th minute of the game Pavel Nedved got first a yellow card after his crazy sliding on the legs of Milanetto and within 30 seconds a direct red card after he jumped in the back of Konko without any possibilty to reach the ball. Today Nedved got a punishment of 2 matches, 3 less than last year after the match against Genoa when he kicked Francesco Bega in the 93rd minute. Also Juventus-coach Claudio Raineri got a red card and he is banned for 1 match. Genoa-defender Alessandro Lucarelli got his 4th yellow card of the season and is also banned for the next match against Fiorentina.

In Italy it is this season also possible to ban a part of the stadium if they destroy the fun of football. Because of their misbehaviour against Napoli the second ring North of Giuseppe Meazza stadium, the place of Inter-ultras, has to be empty against Genoa at 31st October. A good punishment if you insult our Napoli-friends.