The score in corners was clear: 9-1, Genoa also was the boss in the field by ball possession: 55%-45%, but unfortunately we did not score. In Holland we name a 0-0 result: bloodless, in Italy they say it was a perfect match because no team made a mistake that lead to a goal of the other team. Genoa Club Amsterdam is happy with the return of Lucho Figueroa, because until now we were almost completely in the hands of Marco Borriello, who scored 5 of our 8 goals and feared Cannavaro of Napoli to score the 6th in his own goal. 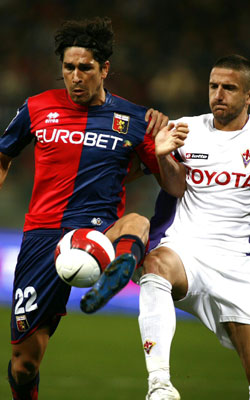