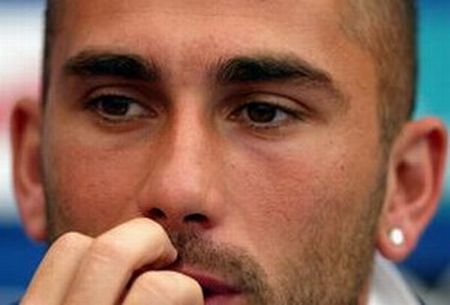 It doesn’t matter in which team Marco di Vaio plays, the 31 years ago in Rome born striker scores everywhere. In his career he played with Lazio (3 goals), Verona (1), Bari (3), Salernitana (33), Parma (41), Juventus (18), Valencia (11), Monaco (8) and with the Italian national-team (2 goals in 14 games). Since january 2007 Marco plays with Genoa and in his first half-year he already scored 9 goals which brought Genoa back in Serie A after 12 years. This season he already scored against Cagliari and more goals are coming. Outside the field you can always find him together with our other player of Rome: Manuel Coppola. Let’s hope the two of them stay for many years with Genoa.

Also in Holland Marco di Vaio is very popular. Dutch Serie-A striker Kevin Bobson (born in Amsterdam, raised in the youth of Ajax and now playing with Willem II in the south of Holland) named his son after our friendly striker: Divaio. So the goals will continue in the future by Divaio Bobson.