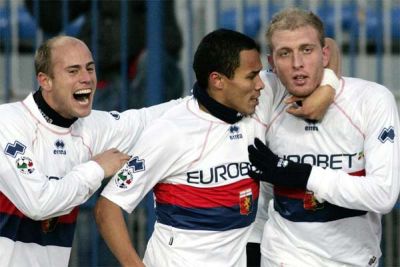 Again Mr. Gasperini surprised everybody with his line-up. Scared for a new defeat he changed the usual offensive 3-4-3 system in a defensive 4-4-1-1. As usual it did not help, because without good defenders it is impossible to defend good, even if you put 9 defensive players in the team. In the first half Empoli hit te post twice and in the injury-time Giovinco scored the 1-0 lead behind Rubinho.

After half-time Gasperini changed the system into 4-2-4 with the forwards: Leon, Borriello, Figueroa and Santos (central-defender in the first half). In the 55th minute Genoa deserved a penalty when Marzorati stopped Ivan Juric irregulary, but referee Giannoccaro didn’t whistle. At the end the fantastic mentality of the players gave Genoa the deserved goal in the 87th minute when Masiello shoot a perfect pass of Figueroa behind keeper Balli. In the last 8 minutes till the end-whistle in the 95th minute Empoli tried everything to change the score again, but this time we survived the last minutes. After all a correct result which kept Genoa on 15th position in the standings.