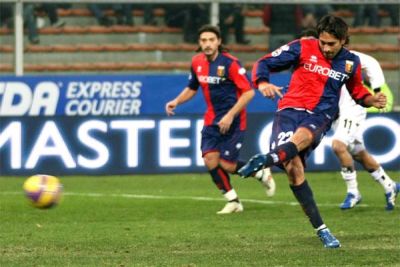 After 9 matches without a victory, Genoa has beaten Parma by 1-0. The Gasperini-boys played very good in defense and Rubinho was unemployed for the first 75 minutes of the game. In the 42nd minute Genoa got a penalty because Paci could not take his hands off the shirt of Borriello. Our topscorer himself scored the penalty, making his 8th goal of the season. In the hapiness Matteo Paro get injured by an elbow of Sculli who was a little too enthousiastic.

In the second half the defense of Genoa was very strong, also in the air with De Rosa, Masiello and Santos. Parma only had 1 good shot on the goal, but Rubinho kept his goal clean. In the 94th minute substitute Papa Waigo scored the second goal of Genoa but he was in off-side so the final result was: 1-0.