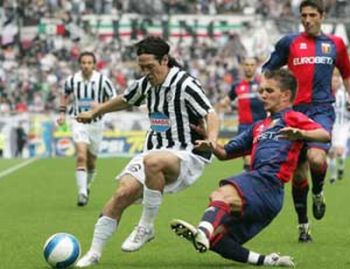 The only line-up player of last season that had to leave Genoa last summer is back where he belongs. Despite the fact that a lot of football-watchers think Mimmo Criscito has everything to become the new Paolo Maldini, he never was very popular with Juventus. The main reason: last summer Criscito told everybody that he wanted to stay with Genoa in stead of moving to Juventus, the most succesful and biggest club of Italy. Millions of boys in the whole world dream to play once in the jail-outfit of Juventus, but not Criscito, he prefered to stay with Mr. Gasperini. Because of the fact Juventus is the owner of Mimmo, he had to go to Turin last summer, but after only 8 matches in Serie A and 1 in Coppa Italia the player of young Italy below 21 years is back. Genoa rents the young very talented defender till the end of the season and can buy him definitively by paying € 6 million next summer.

Criscito is the first arrival in this tranfer-period. The newspapers say that 2 or 3 other new players are expected the next weeks. Every day there are new names in the newspapers, but the strikers Jeda (Rimini) and Olivera (Juventus) and midfield-player Foggia (Cagliari and player of the Italian national team) are already for some days close to a transfer to Genoa in the opinion of the journalists. If all these players arrive, Mr. Gasperini also wants to say goodbye to some players because he wants to work with a maximum of 22 line-up candidates. In the rumours: defender Cicco Bega, midfield-player Manuel Coppola and the strikers Marco di Vaio and Papa Waigo are on the transferlist to leave Genoa. Let’s see what happens the next weeks.