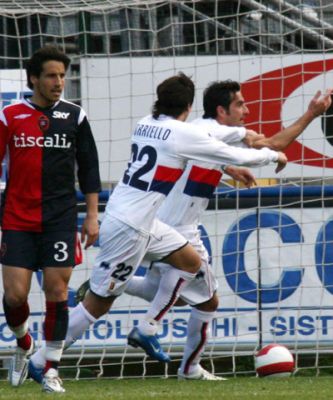 On the island Sardinia Genoa lost 3 points against Cagliari but remained on the 8th position in the standings. Of course it was clear it would be a difficult match without Konko, Paro, Santos and Bovo and after 2 great victories against Udinese and Napoli. It also was known that Cagliari would be very agressive and motivated because they lost Friday 3 points behind the green table.

However Genoa started the match very good. In the first 15 minutes there was a header of Sculli over the goal, a shot of Borriello that was saved by goalkeeper Storari, a header of De Rosa and finally the first goal of Lucarelli after a fantastic cross of Fabiano: 0-1. The breakpoint of the match was in the 29th minute. Out of a corner Criscito headed the ball at the crossbar and 20 seconds later, while Criscito was still on the way back to the defense, Acquafresca shot the ball behind Rubinho: 1-1. A few seconds before the halftime whistle of the referee Cagliari got a corner that was headed by Acquafresca on the post, but the ball bounced at the back of unlucky Rubinho into the goal: 2-1 and Rubinho injured. In the second half with Scarpi, Figueroa and Danilo in the team Genoa tried to score the equalizer but only 1 time Leon was close.