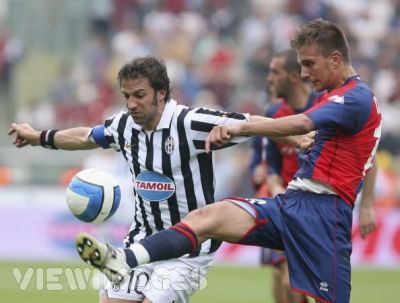 Yesterday-evening 28.151 people watched Genoa-Juventus in Luigi Ferraris Stadium. Only 1.000 (!!) of them were happy at the end of the match with the 0-2 result by goals of Grygera and Trezeguet in the first half. The most succesfull team of Italy with the most supporters (??) brought only 1.000 fans to one of the closest away-matches in the first season in Serie A after the punishment. Knowing this it is easy to explain why players like Criscito prefer Genoa (football, passion and friendship) above Juventus (only money). With Genoa the Belgium player Anthony Vanden Borre made his debut 31 minutes before the end as a substitute of Milanetto that was kicked out of the match by Camoranesi. The referee refused to give Camoranesi his second yellow card, just like Cassano 3 weeks ago. Genoa is now 9th in the standings.