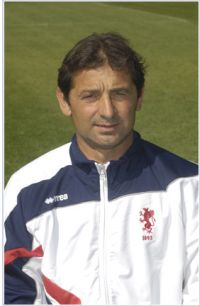 Because Mr. Gasperini is banned after his red card last week against A.S. Roma tomorrow assistent coach Bruno Caneo is the boss of the team. He can use, as expected, playmaker Omar Milanetto but has to miss Ivan Juric and Danilo who are not able to play yet. The 19 players, including youngsters Ghinassi and Raggio Garibaldi, that want to keep Genoa close to the Uefa-zone on the 8th place in the standings: