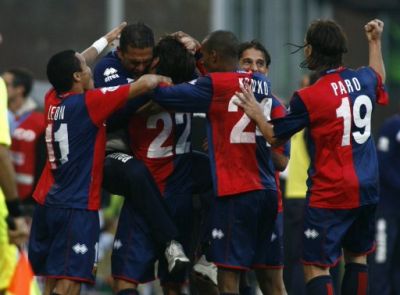 After the undeserved lost match in Rome 2 weeks ago the European dream of Genoa seemed over, but after the fantastic 3-0 victory last week against Torino and the defeats of Udinese and Sampdoria the hope to play in UEFA-cup next year returned. If Inter and Roma play the final of the Coppa Italia (both are in the semifinals) number 7 of the standings also plays in UEFA-cup and number 8 can play in the Intertoto-tournament. At the moment Genoa is the number 8 in the standings 6 points below number 7 Udinese that plays against number 6 Sampdoria tomorrow, which means that a victory of Genoa in Siena in front of nearly 4000 Genoa-fans that travel 307 kilometers to Toscany automaticly brings the Gasperini-boys closer to UEFA-cup zone.

This afternoon Genoa went by coach to Siena without the injured Paro, Santos, Masiero + Fabiano and the banned Lucarelli and Milanetto. The 19 players on the road to Europe: