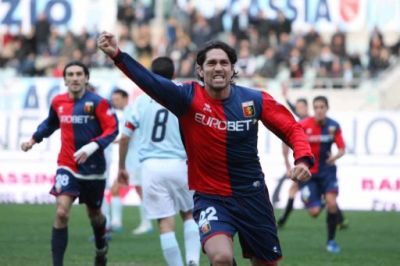 Despite the fact that A.C. Milan owner of 50% of Marco Borriello wants him back in San Siro next year and several other big clubs in Italy and England offer very good contracts, Marco Borriello prefers to stay with Genoa. Hopefully Genoa can pay the enormous amount to A.C. Milan (around € 10 million) to buy the other 50% of the topscorer in Serie A. Especially the trust that president Enrico Preziosi had in him last summer when he spend € 2 million to buy 50% of the transfer-rights of Marco Borriello to A.C. Milan makes Marco’s wish to stay in Mr. Gasperini’s red and blue team.

Sunday in the last match of the season in Bergamo against Atalanta Genoa has to miss surely 5 injured players: Paro, Masiero, Vanden Borre, Criscito and Sculli. It looks like Rubinho and Danilo can recover in time.