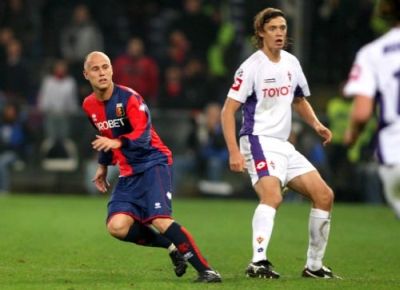 Tonight Mr. Enrico Preziosi spoke on the local televisionchannel Telecitta about the transfermarket. He confirmed that untill now Genoa has sold Borriello to Milan and bought Modesto (Reggina), Di Gennaro (Milan) and today Gasbarroni (Parma). Every day the newspapers are full with stories and speculations about the central-forward that substitutes Marco Borriello. The last days they wrote about Pazzini (Fiorentina), Bianchi (Manchester City), Maccarone (Siena) and Bjelanovic (Torino), but tonight Mr. Preziosi confirmed his trust in Lucho Figueroa as our central-forward in the season 2008-2009.