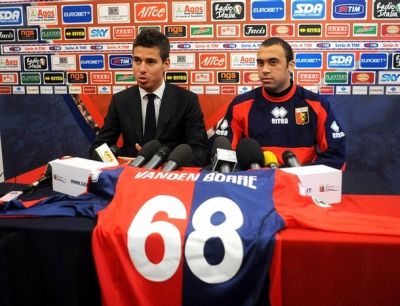 The 20 years old talented Belgium defensive midfieldplayer Anthony Vanden Borre who arrived last January with Genoa and played only 164 minutes in the Rossoblu team last season stays with Genoa. Today Genoa’s president Enrico Preziosi bought the other 50% of the player which was still in the hands of Fiorentina. Coach Mr. Gasperini believes in the progression of the French-speaking ex-player of Anderlecht and Fiorentina. Let’s hope as the official Genoa supportersclub in Belgium (and Holland) we can have an interview with big Anthony next season.

As written before also Raffaele Palladino, Matteo Paro and Domenico Criscito play with Genoa next season. The new team of Mr. Gasperini at the moment, 3 weeks before the first training, only misses a big central defender (Domizzi of Napoli ?) and a substitute to central-forward Lucho Figueroa (Olivera of Juventus ? Cacia of Fiorentina ?)