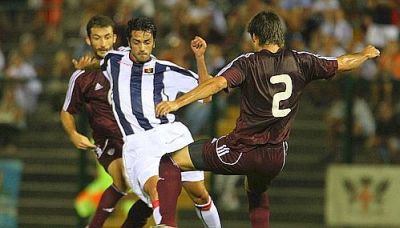 Within 20 hours Genoa played 3 friendly matches. Genoa should start the mini-tournament with matches of 45 minutes in Alessandria against Larissa (Greece Serie A), but the official documents of the Greece team failed, so the referee did not want to start the match. Half an hour later Genoa opened the tournament against the hometeam Alessandria (Serie C-2). With a goal of Biava in the 8th minute the Gasperini-boys did win the opening-match. Directly after this game Genoa had to play against Larissa that in the meanwhile resolved the administrative problems. Maybe because of the combination of the high temperature and the fact that it was the first match of Larissa and the second of Genoa, the Greece team did win the match by 2-0, which meant the first defeat of Genoa this summer after 5 victories (18-1, 4-0, 1-0, 8-0 and 1-0).

This afternoon the Grifoni played their third match within 20 hours against Derthona (Serie D). This match was especially organized to give the 2 last arrivals: Sokratis Papastathopoulos (who prefers that we name him Sokratis) and Matteo Ferrari 90 minutes playtime before their first homematch against AZ Alkmaar next Wednesday. Genoa did win the match by 5-0 with goals of Gasbarroni (2x), Di Vaio, Olivera and Palladino.