In a nice match with 12.000 supporters in Stadium Luigi Ferraris, that was influenced by the decisions of referee Banti, Genoa did win the Tropheo Spagnolo: 3-1 against AZ Alkmaar. Genoa started with Rubinho; Potenza, Ferrari, Biava; Mesto, Milanetto, Juric, Modesto; Sculli, Figueroa and Palladino. In the 2nd minute Brett Holman scored the opening-goal while the whole defence of Genoa not was awake yet. After this goal Genoa was the best team in the field, but AZ stayed dangerous with a ball of (again) Holman on the post. In the 35th minute Genoa was helped by referee Banti who gave both a dubious penalty to Sculli of Genoa and an undeserved second yellow, so red, card to defender Donk of AZ, that had to play the last 55 minutes with 10 players. Figueroa realized the penalty, so at halftime the score was 1-1. 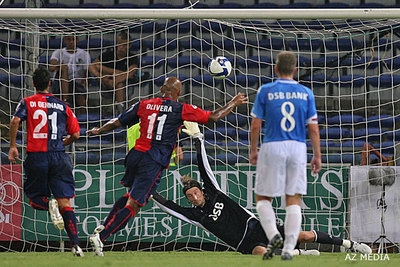 After 5 minutes in the second half Mr. Gasperini brought Rossi, Gasbarroni and Rubèn Olivera in the field and within a few minutes Olivera headed a fantastic cross of Gasbarroni behind goalkeeper Didulica of AZ. In the 76th minute the match was decided by again Olivera who scored the 3rd goal after a wonderfull combination of Di Gennaro and Gasbarroni. A few minutes later also AZ got a penalty of referee Banti but Rubinho stopped the shot of Ari. After the match the parents of murdered Vincenzo Claudio Spagnolo hand over the trophy to captain Marco Rossi. 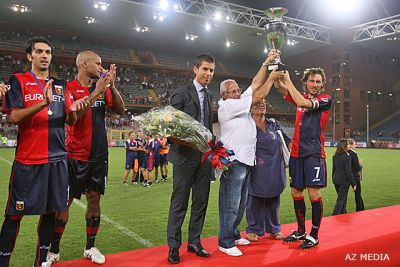