After his heavy injury in the match against Napoli last February probably tomorrow Matteo Paro plays his first friendly-match with Genoa against Albese (Serie D). The young talented midfielder was missed over 6 months because of the operation of his left knee. A few days before the start of the season it looks like our captain Marco Rossi has lost his position in the line-up. Last season our ex-Genoano of the year formed the perfect couple with Abdoulay Konko who now plays with Sevilla in Spain. Against AZ Alkmaar Potenza and Mesto played at the right-side of the field keeping Marco Rossi on the bench. In the newspapers the last days was written that Marco, who enlarged only 3 weeks ago his contract till the summer of 2011, is wanted by several other teams in the Serie A, but the club ignored the rumours immediately. Marco Rossi is not for sale (we hope just as Lucho Figueroa who has to score the next matches to stay with Genoa). 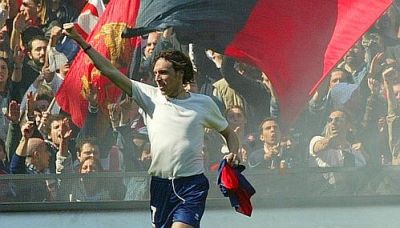