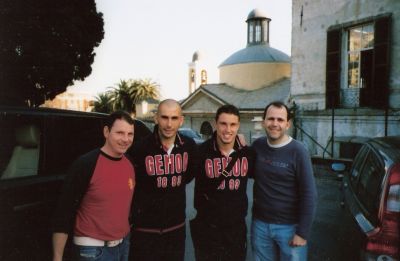 After Manuel Coppola last January, now also Marco di Vaio has left Genoa. Two great players from Rome, that always gave us a feeling of homecoming if we visited the Pegli-trainingfield. Both friends brought Genoa back in Serie A as line-up players in the Serie B season 2006-2007, but did not get much playtime in Serie A with Genoa. As a modern footballplayer you go from club to club, trying to win and earn as much as possible in 15 years. Of course Manuel and Marco are right to leave Genoa and of course Mr. Gasperini is right that he always wants to play with the best team, but it is a pity that especially these 2 friendly players leave. Manuel and Marco lots of succes in the rest of your career, we hope you will have lots of succes, except in the matches against Genoa of course.