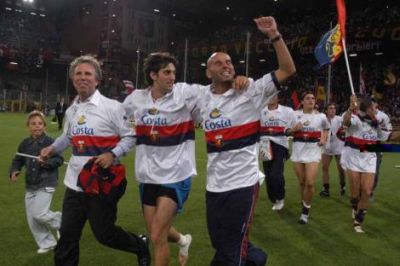 Enrico Preziosi did it again: today he bought 3 new players: midfielders Davide Brivio (20 years of Vicenza) and Bosko Jankovic (24 years of Palermo) and the big surprise: striker Diego Alberto Milito (29 years of Real Zaragoza) who already scored 33 goals in 59 Serie B-matches with Genoa from January 2004 till June 2005. Besides these new players also the contracts of Nicolas Domingo and Marcel Roman are official now, while Davide di Gennaro was sold to Reggina today. All of this means that also Figueroa stays with Genoa.

The last 2 transfers in Italy of the summer of 2008 were: Jankovic, just before 19.00 and Milito just after 19.00 hours. The first rumours said that the transfer was annulated because it arrived too late, but because Fabrizio Preziosi already brought the first page of the contract right before 19.00 in the office of Lega Calcio they accepted that the rest of the contract with the signatures arrived just after 7 o’clock. All of this happened because Tottenham Hotspur at 17.00 hours did a better offer than Genoa to Real Zaragoza, so Preziosi had to raise his offer with € 2 million after which Zaragoza hoped that also Spurs would higher their price, but they didn’t so Zaragoza had to agree with the last offer of Preziosi and send their signature by fax at closing-time 7 o’clock.

Everybody who has forgotten Diego (Il Principe) Milito, watch this video: