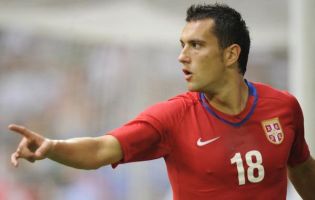 Maybe the transfer of Bosko Jankovic is the most important of this summer. Since the injury of Matteo Paro in February we miss a substitute of Omar Milanetto and now we finally found him with Jankovic. The 24 years old central midfielder is raised with Red Star Belgrado, played 28 matches (9 goals) with Real Mallorca in the Spanish Primera Division in the season 2006-2007 and 26 matches with 2 goals last year with Palermo. Bosko also brings some useful “body” in our team with his 1.84 meters and 77 kilo’s.

With the departure of both Brazilians Fabiano and Danilo we lost both left midfielders in the team. Genoa already bought Francesco Modesto of Reggina this summer and with Davide Brivio we now also have a natural substitute. Davide is only 20 years and raised in the youth of Atalanta Bergamo. He already played 2 Serie A matches with Fiorentina and last year 27 matches with Vicenza in Serie B.

Friday again 220 seasontickets were sold, so Militomania still goes on. To show once again why Diego Milito is so populair hereby the highlights of the match Real Zaragoza-Real Madrid of 8th february 2006. Real Madrid played with Beckham, Ronaldo, Casillas, Robert Carlos, etc., but they were beaten by 6-1 with first 4 goals of Milito: