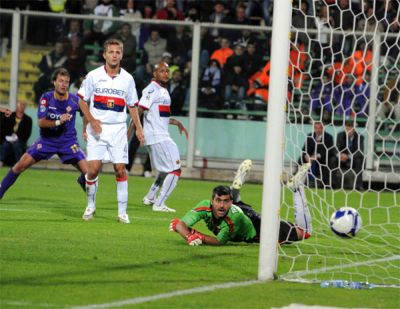 On this website we hardly never speak about referees, but sometimes we have to. Here in Holland the whole week the newspapers still are full of referee Braamhaar who refused to give visitors Ajax a clear penalty and a few minutes later gave hometeam Feyenoord a very dubious penalty in the battle of Holland last Sunday. Last Wednesday Genoa was lucky when referee Brighi annulated a regular goal of Panucci and yesterday referee Rosetti (the best in Italy they say ?) let Gilardino score the only goal while he was in off-side position. He also refused to give Milito a penalty in the 93rd minute. The explanation of all of these moments is very easy: the referee always helped the hometeam with the very passioned fans. We can now easily prove that the public can help you to win points.

Mr. Gasperini gave Biava, Juric, Modesto, Sculli and Milito rest yesterday and started with Sokratis, Bocchetti, Vanden Borre, Olivera and Palladino in the line-up. Unless the 5 substitutions the team played a good match and was unlucky that goalkeeper Frey of Fiorentina had an incredible good reaction on a shot of Milito in the 2nd half and referee Rosetti did not whistle when Gilardino scored in off-side position in the 60th minute. 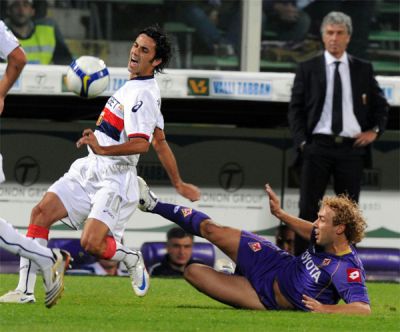