The last 60 homematches Italian Champions and number 1 in the standings Inter always scored at least 1 goal and so far this season Genoa never was unbeaten outside Luigi Ferraris. Statistics say a lot in football, but not everything. Today Genoa played a fantastic match and deserved a draw in Giuseppe Meazza, especially because the last 36 minutes we played with 10 players after the second yellow card of Juric by referee Orsato, who refused to give frustated Zlatan Ibrahimovic at least 4 yellow cards.

For the first time Thiago Motta started in the line-up and because both Palladino and Gasbarroni were not ready to play Mr. Gasperini put Marco Rossi together with Milito and Sculli as forward. Genoa played a fantastic first half and deserved a goal in the 36th minute when Mesto hit the crossbar with his 25 meters shot. In the second half of course Inter became stronger and stronger and especially after the red card of Juric in the 60th minute we all feared that Inter would score. Maicon hit the crossbar and Ibrahimovic, Cruz and Balotelli did everything to beat Rubinho, who keeped a perfect match. In the 96th minute Thiago Motta almost scored the winning goal with a great free-kick but this would be too much. The draw already was perfect! 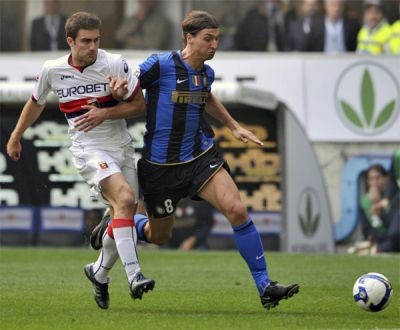