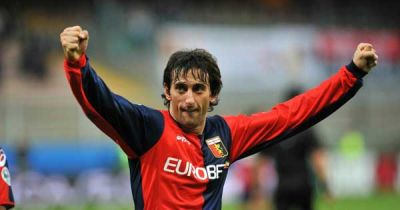 Our red and blue team did also win it’s 6th homematch of the season against Reggina: 4-0. All the goals were scored in the second half: 3 by the new topscorer in Serie A: Diego Milito and the other one by Giuseppe Sculli. Genoa stays 7th in the standings with 20 points in 11 matches.

With Bocchetti and Palladino in the line-up instead of Criscito and Gasbarroni we started in the usual 3-4-3 system. Unless the last position in the standings Reggina played a good first half in which it was almost equal to Genoa. The breakpoint in the match was the 2nd yellow, so red card to Reggina-defender Costa just before the halftime whistle. With 11 against 10 Genoa started the 2nd half very offensively, also because after 4 minutes Gasperini substituted midfielder Mesto by 4th striker Gasbarroni. The substitute deserved only 4 minutes after his arrival a penalty that was realized by Milito: 1-0. After Genoa missed many changes to score the deciding goal it was again Diego Milito who headed in the 74th minute the 2nd goal behind goalkeeper Campagnolo. In the last 15 minutes Sculli and once again Milito scored the 3rd and 4th goal, so now our Diego is topscorer of Italy with 9 goals in only 11 matches.