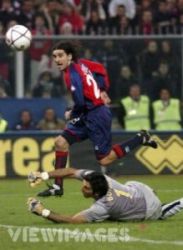 Because of a match of the Italian rugby-team Genoa has to play already tomorrownight in Stadio Olimpico of Torino. A special match because our former Juventus youth-trainer Gasperini has brought 7 ex-players of the youth of Juventus in our red and blue team: Criscito, Palladino (both for 50% owned by the Old Lady), Sculli, Gasbarroni, Paro, Olivera and Milanetto (a fanatic Torino-fan unless the fact he played in the youth of Juventus).

Besides the many ex-players Juventus-Genoa is also the match between the 2 best players in Italy last weekend: our topscorer Diego Milito and free-kick specialist Del Piero, while the other old star of Juventus: Pavel Nedved maybe tomorrow can leave the match without the red card he got the last 2 times. Injured goalkeeper and Genoa-supporter Buffon has some difficult decisions to make: does he watch the match on the vip-tribune or in the visitors-sector and what is stronger: his wallet or his heart?