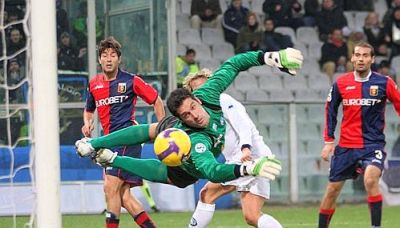 So far this season Genoa played 9 matches in Luigi Ferraris and we are still unbeaten. After 6 victories (Milan, Roma, Napoli, Siena, Cagliari, Reggina) we draw against Bologna, won last week the derby by Milito and now we draw again by a late goal of Sculli: 1-1.

Today Genoa surely missed banned Giuseppe Biava and Ivan Juric, our midfielder from Croazia who got injured just before the start of the match. Comparing to the derby Sokratis and Palladino returned in the line-up, while 16 years old talented striker Stephan El Shaarawy stayed on the bench for the complete 90 minutes.

Within 5 minutes Diego Milito, who was not completely healthy, hit the post and everybody waited for the opening-goal which came, but on the other side by a goal of Floccari in the 17th minute: 0-1, which was also the score at halftime. In the second half it was a classical drama with 3 annulated Genoa-goals (Milanetto, Milito and Jankovic) because of off-side, 3 red cards (Bellini and Rivalta of Atalanta and our Milanetto) and finally in the 87th minute the deserved equalizer by a header of Giuseppe Sculli: 1-1. Genoa stays on the 6th (Uefa-cup) position in the standings with 26 points, 2 more than Atalanta. Next week we play the last match of the year 2008 in Verona against number last Chievo.