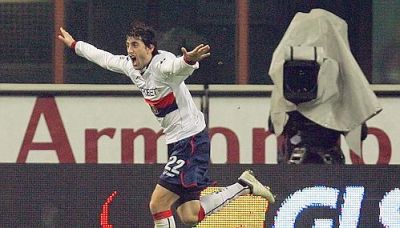 After a fantastic second half Genoa draw against the stars of A.C. Milan: 1-1. In the first half David Beckham scored the opening-goal with a great free-kick, while Andrea Pirlo of Milan hit the crossbar twice with a free-kick. In the 2nd half Genoa was surely the best team in the field. In the 81st minute goalkeeper Abbiati saved a great header of Milito, but 6 minutes later Diego let Abbiati no chance: 1-1. In the 92nd Milito ran towards Abbiati to score also the winning-goal, but Maldini kicked him from the back. Referee Gervasoni saved Maldini to show him only a yellow card and Jankovic could not realizee the free-kick, so the matched ended in 1-1. A fantastic result, which keeps us on the 4th Champions League position in the standings.