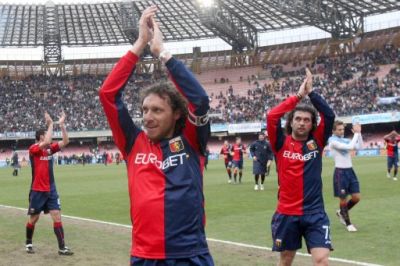 Since the return of both teams in Serie A four times Genoa and Napoli played against each other and our Rossoblu-boys did win alle 4 matches. Last year the results were 1-2 in San Paolo and 2-0 in Genova and this season Napoli was beaten by 3-2 in Luigi Ferraris and 0-1 today.

While Napoli was the team with the most ballpossession today, Genoa created the 3 biggest chances. In the first half Milito was stopped by goalkeeper Navarro of Napoli, who als saved a great header of Jankovic just before the end. The only goal was made by substitute Bosko Jankovic who beat Navarro after a fantastic assist of Thiago Motta in the 69th minute. After the last whistle of referee Orsato the Napoli-fans clapped their hands to the Genoa-players while they screamed against their own trainer and players. The same thing happened outside the stadium: the Genoa-players got compliments of the Napolitans when they stepped into the coach, while the Napoli-players could not leave their dressingroom that was blocked by unhappy supporters. With this victory Genoa stays 5th in the standings while Mutu of Fiorentina again scored a very dubious winning goal in the 94th minute. An investigation of Lega Calcio should start. 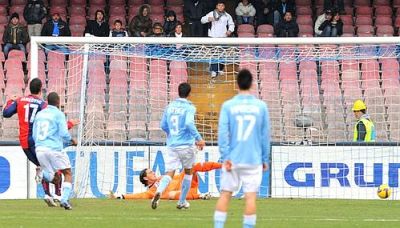