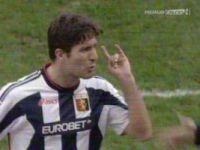 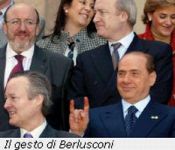 This afternoon Genoa plays against the only Italian team which is still present in European football: Udinese. The black and white team lost last Thursday by 1-0 against Zenit, which was good enough after the 2-0 home-victory. In the quarter finals of Uefa-Cup Udinese plays against Werder Bremen of Germany.

It looked like that besides the injured Motta, Scarpi and Vanden Borre, the banned Jankovic and the recovering Paro our team also had to miss Giuseppe Sculli against Udinese. This week was the process against our wingstriker who made the evil-sign after his red card against A.S. Roma. If you see that “worldleaders” like Bush and Berlusconi can make the sign without any punishment it is unbelievable that our Sculli would be banned of the footballfield for some weeks. Luckily Beppe Sculli did win the process, so he can play with the following other 18 players today at 15.00 hours: