Giuseppe Sculli did score his latest goal at 18th January in Lecce, while Diego Milito scored 15th February his 15th and last goal against Fiorentina. Today our goalscoring couple refound the goal by scoring in the 2nd half against Udinese: 2-0.

It must be said, today we had nothing to complain about referee Ayroldi. In the 15th minute of the second half Juric stopped striker Floro Flores of Udinese in the Genoa penaltyarea and Ayroldi could whistle a penalty, but he did not and 30 seconds later Giuseppe Sculli scored the opening-goal at the other side of the field. After 6 annulated regular goals of Genoa so far this season we deserve a little luck, but it is clear that Udinese has nothing to do with that. On the other hand: Genoa was the best team in the field and played with 4 strikers after Marco Rossi was substituted by Ruben Olivera. In the 93rd minute Diego Milito scored his 16th goal after a great cross of Paladino: 2-0. 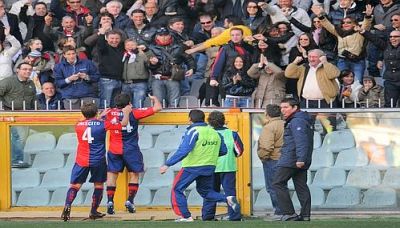