After 4 victories in a row without Diego Milito yesterday we missed our topscorer, who watched the match in Gradinata Nord. Genoa started very good and was several times close to the openinggoal with chances of Jankovic, Motta, Palladino, Criscito and Sculli but Lazio’s keeper Muslera saved his team every time. At halftime the score was still 0-0, but if Genoa would create as many chances as in the first half the openinggoal was just a matter of time. After 65 minutes the goal arrived, but at the other side. Lazio’s striker Zarate was faster than our Salvator Bocchetti and beat Rubinho in the far corner: 0-1. The goal broke Genoa that could not create big chances any more, so we lost the match. 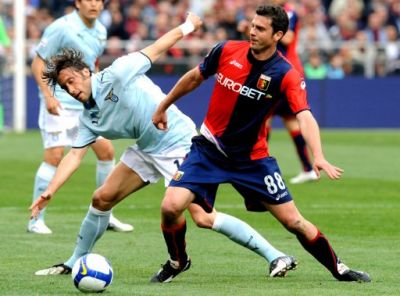 Luckily today Udinese beat Fiorentina (3-1), so we stay 4th in the standings. Next week Genoa plays in Bologna (18th in the standings) while numbers 5 (Fiorentina) and 6 (Roma, that beat Lecce today by 3-2) play against each other in Florence.