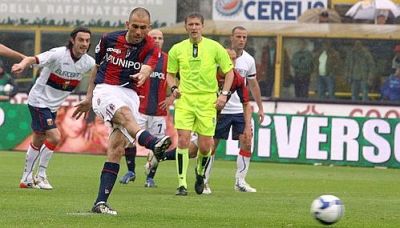 Till today Genoa never lost 2 games in a row, so we all hoped and expected a revenge against Bologna. With an almost complete selection and Milito in the line-up everything seemed allright to play a good match, but we played one of the worst of this season. Just after Jankovic missed a great chance it was neo-international Bocchetti who made a big defensive error. In stead of shooting the ball inmediately out of our penaltyarea our 22 years old defender waited too long till Mingazzini arrived and then he kicked his legs in stead of the ball: penalty. Our friendly ex-striker Marco di Vaio realized the present and scored his 21st goal of the season. Only 10 minutes later also the second goal arrived: a free-kick of Adailton reached completely free Terzi at the far post who scored easily the second goal of Bologna. After the goals it was Genoa that played the game (64% ball-possession) and created several chances, but we never scored.

Believe it or not, but Cassano of our rivals of Sampdoria helped us to become even closer to European football with his late equalizer against Cagliari: 3-3. Because Fiorentina beat Roma by 4-1 we lost the 4th place in the standings, but on the other hand our advantage of Roma rested 5 points. Also our 2 other concurrents: Palermo and Lazio lost their matches, so the advantage of position 7 stayed 8 points, with only 5 playrounds to go.