This afternoon Genoa did win the match against our friends of Torino. Diego Milito scored twice (0-1 in 32nd minute by penalty and 2-3 in 89th minute with a header), while Ruben Olivera scored the other goal (1-2 in 48th minute by free-kick).

The match ended with a big fight immediately after the last whistle of referee Saccani between a lot of players. Hopefully the victory of Genoa in the last minute don’t lead to the relagation of Torino or remarks the end of a very long friendship since 1973 between the fans. On the other hand: since Genoa-Venezia 11th June 2005 we know that you always have to play a regular match and always must try to win it. If another team can’t stand us because we beat them, it is their problem not ours ! 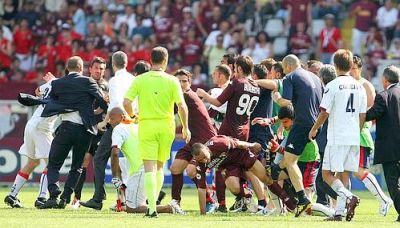