Tonight Genoa beat Odense BK by 3-1 in the first match of the Play-offs to qualify to the Europa League. With the injured strikers Crespo, Floccari, Jankovic and Palladino our coach Mr. Gasperini did not had a lot of choices between the strikers in his team. Genoa started with the following 3-4-3 line-up: Amelia; Biava, Moretti, Bocchetti; Mesto, Milanetto, Juric, Criscito; Palacio, Figueroa and Sculli. In front of 21.889 supporters Genoa started very agressive and already after 8 minutes Emilano Moretti with the help of a Danish defender scored the openinggoal: 1-0. In the rest of the first half our red and blue team was several times close to 2-0, but on the other side Odense hit the crossbar once. In the first 11 minutes of the second half Lucho Figueroa scored twice in front of his fans in Gradinata Nord. The 2-0 was a classical header of a central-striker: 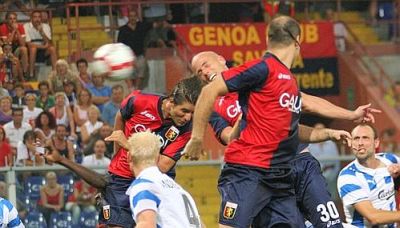 The third goal was also made by Figueroa after Sculli hit the crossbar and Biava’s rebound was blocked by goalkeeper Carroll towards Figueroa who did not think for a second: 3-0. The joy lasted only 2 minutes when Gislason brought the 3-1 on the scoreboard. After the goal of Odense both teams had some changes, but the match ended with 3-1 and a heavy ankle-injury of our young defender Salvatore Bocchetti. The return is next week in Odense with a Dutch referee: Björn Kuipers.