Genoa took 2 times the lead by goals of Mesto and Floccari but at the end Cagliari with the help of referee Gava decided the match with 2 goals in the last minutes. 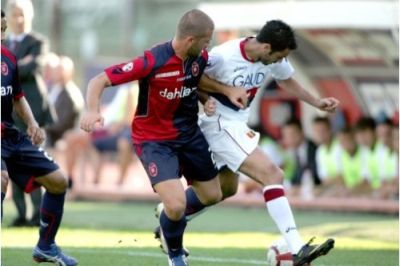 The problem of the matches against Inter and Lille was that we did not score, worse we hardly get real chances to make a goal. Yesterday we scored twice, a lucky free-kick by Mesto and a regular goal by Floccari. Till 15 minutes before the end Genoa was only beaten by an off-side goal of Cagliari and everything seemed under control. In the 77th minute referee Gava gave Cagliari a penalty because of hands of Biava and a second yellow, so red card to Moretti. The penalty was scored by Nene and 3 minutes before the end also the last goal was totally unnecessary scored by Cagliari after Sokratis lost the ball without any reason on midfield. Again a defeat of Genoa, but this time we deserved at least a draw. Wednesday we can have revanche if Fiorentina visits Luigi Ferraris.