Yesterday 2 of the best football playing teams of Italy: Genoa and Parma played against each other in Luigi Ferraris. The match was spectacular and on a high level. After 14 minutes Rodrigo Palacio scored his first Serie-A goal in front of Gradinata Nord: 1-0. Twelve minutes later Raffaele Palladino doubled the score, but the goal was annulated because of off-side. Parma became stronger and stronger and in 36th minute Biabiany scored the 1-1 equalizer. With this score the first half ended. 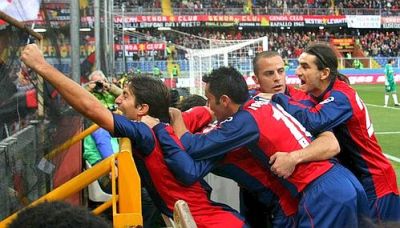 In the 2nd half it was again Biabiany who scored and brought Parma the lead. Genoa reacted immediately and goalkeeper Mirante became one of the most bussy players in the field. In the 21st minute Raffaele Palladino scored the equalizer: 2-2 with a great shot outside the penaltyarea just besides the post. Four minutes later Omar Milanetto scored 3-2, but the goal was irregulary annulated because of off-side while Milanetto was behind the ball at the moment Sculli passed it towards him. The last big chance was missed by Zaccardo who headed the ball just over the goal of Alessio Scarpi. The match ended in 2-2, which means Parma stays 4th and Genoa 7th in the standings.