Genoa missed 8 line-up players against Bari: 3 defenders (Bocchetti, Dainelli and Moretti), 2 midfieldplayers (Rossi and Kharja) and 3 strikers (Jankovic, Palacio and Suazo). On the bench Mr. Gasperini was like a father with Amelia, Fatic and 5 youthplayers. In the 1st half Bari was the best team in the field but the Pugliesi missed serveral chances: 0-0 at halftime. In the 12th minute of the second half our rented player to Bari: Meggiorini scored the opening goal: 1-0. Mr. Gasperini thought Meggiorini made a foul before he scored and protested heavily which costed him a red card and 2 matches squalification. After the goal of course Genoa tried to score the equalizer and assistent-coach Bruneo Caneo substited Zapater, Sculli and Palladino by the youngsters: Cofie, Boakye and El Shaarawi. This all did not help and in the last 5 minutes Bari scored 2-0 and 3-0 which was too much. Because also all our concurrents lost we are still on the 8th position in the standings, but the European dream is definitively over. 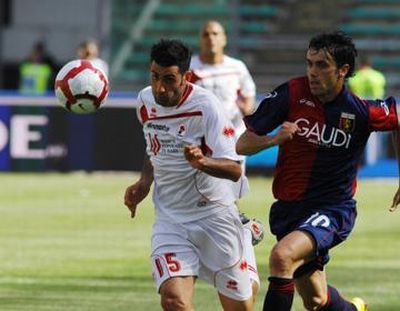