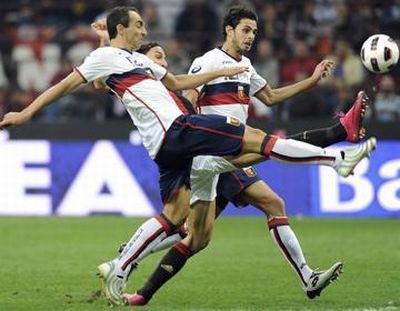 Especially just before and right after halftime Genoa played very good and had big chances (Palacio twice and Chico) to open the score in San Siro. In the 49th minute a long ball of Pirlo behind the Genoa-defense was touched by Ibrahimovic inbetween Dainelli and Ranocchia who both were not agressive enough. Because also Eduardo was too far out of the goal Zlatan scored the undeserved openinggoal. During the rest of the match Genoa did everything to try to score the equalizer, which gave Milan the biggest chances in the contra-attack. Our goalkeeper Eduardo saved us several times, just as Criscito, but at the end we only got the compliments and not the points: Milan-Genoa 1-0.