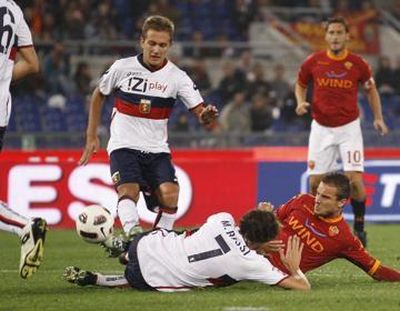 Just as the last weeks Genoa played a good match, but again we had no points at the end. Because Veloso and Rafinha could not start in Rome our captain Marco Rossi returned in the line-up. Ten minutes before halftime our ex-goalscorer Marco Borriello opened the score to react first after a cross of Totti was touched by Mimmo Criscito: 1-0. At the beginning of the second half Matteo Brighi scored together with Criscito and Rossi a goal that is impossible to score: 2-0. From this moment there was only 1 team in the field: Genoa! Substitute Rudolf first hit the crossbar and 11 minutes before the end scored 2-1, while Luca Toni deserved a penalty when Burdisso took his shirt with 2 hands to stop a header of Toni. Referee Damato closed his eyes and only gave Genoa 5 minutes injurytime but at the end A.S. Roma was the winner: 2-1. 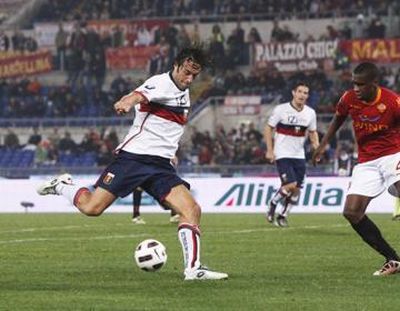 Next Wednesday at 18.00 Genoa plays in Coppa Italia in Luigi Ferraris against Grosseto (Serie B). Saturday some members of Genoa Club Amsterdam fly to Italy to play the calcetto-tournament: United in the name of Genoa and to support Genoa against Catania.