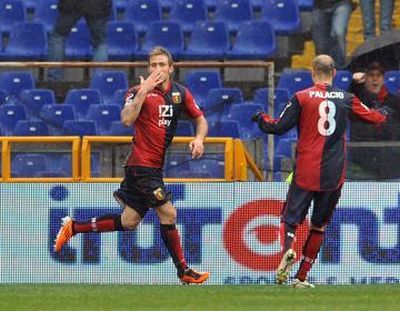 Today Genoa booked a very important victory against Palermo, a concurrent in the race to the Europa League-zone. A goal of Antonio Floro Flores in the 77th minute decided the match that was played during constantly rainfall. Genoa is now 10 points ahead of the relegation-zone and 4 points behind number 7 Juventus. The next weeks have to tell us if we can try to reach European football or that we only have to play to reach the left-side of the standings and to be above Sampdoria which has 7 points less than us and is just above the relegation-zone. Sunday we play at 15.00 hours in Bologna.