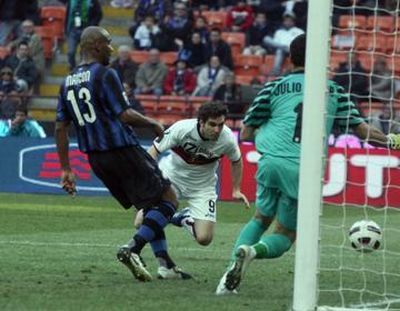 The halftime score was 0-1 by a great goal of Rodrigo Palacio. Within 10 minutes in the second half Inter scored 3 times (Pazzini and 2x Eto’o) and the match was over. Just as in Catania it looked like they had put something in the tea of Genoa at halftime. During the rest of the 2nd half it was an attractive and friendly match with another 3 goals: Pandev and Nagatomo brought the score to 5-1 and Mauro Boselli, who substituted Paloschi in the 74th minute, scored his first goal with Genoa: 5-2.  Genoa now is 12th in the standings with 35 points in 28 matches. Europe is far away at the moment.