Today our Genoano of the year 2007-2008 Omar Milanetto left Genoa to the other team of President Preziosi: Lugano (Switzerland). After the goal in the last seconds of the derby by Mauro Boselli last 8th May several Genoa-players like Rossi, Criscito and Milanetto (see foto) went to Gradinata Nord to blame them for the song: “Il derby non si regala” (the derby is not a present). The fans thought that Genoa and Sampdoria made a deal to draw the derby, which should give an important point to Sampdoria in their struggle to stay in Serie A. Genoa-fans only had one wish: Sampdoria had to relegate to Serie B, so Genoa more than ever had to win the derby. After the goal of Boselli at 96’11” Milanetto should have screamed “Bastardi” (Basterds) to the fans in Gradinata Nord, who were furious. A few days after the derby Milanetto made excuses to the fans, but some of them did not accept this. For these fans Milanetto has made an unforgettable mistake and he has to leave the club. Today these fans got what they wanted: Omar Milanetto ends his career after 5 great season in Liguria with Lugano FC in the Serie B of Switzerland. 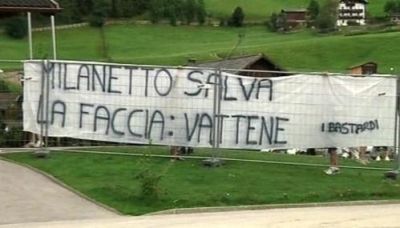 Tonight Omar Milanetto played his last 30 minutes with Genoa in Austria in the friendly match against Stubaital. The score at halftime was 2-0 (Kucka and Pratto) and with double scores of Ribas and Birsa in the 2nd half the match ended in a 6-0 victory of Genoa that played in the offensive 4-3-3 system.