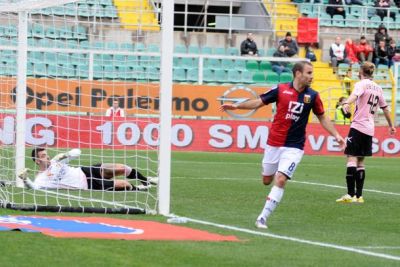 Genoa lost 5-3 in Palermo and is now 10th in the standings. Despite the 7 injuries (Dainelli, Kaladze, Antonelli, Bovo, Rossi, Veloso and Constant) and the debut of Mario Sampirisi Genoa started the match very good in Palermo: after a fantastic combination of Mesto and Gilardino it was Rodrigo Palacio who scored the first goal after 13 minutes. Immediately after the goal the “Tsunami” of Palermo started and the halftime arrived with a 3-1 score to Palermo. Also in the second half Genoa started good and Palacio scored a penalty (3-2) after a handball of defender Balzaretti and brought us back in the match. But just as in the first half it was Palermo that was the most dangerous teams and they scored 4-2 and 5-2. At the end Genoa had several chances and with a little bit more luck we could score more goals than just the one of Jankovic in the 89th minute: 5-3. Next Sunday our friends of Napoli arrive in Marassi, let’s hope that playmaker Miguel Veloso and some of our defenders are healthy again.