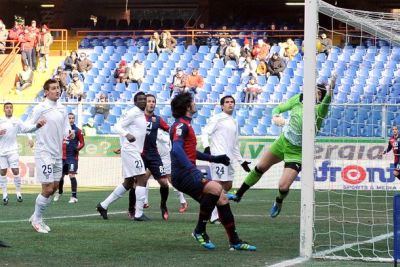 After Udinese and Napoli this time Lazio was send home with a 3-2 defeat in Marassi. Again a very spectacular match with 5 goals and a few minutes of sufference at the end. The just honoured Genoa Club Amsterdam Genoano of the year: Rodrigo Palacio scored the first goal with his heel inmediately out of the corner of Jankovic. A wonderful goal just as last week against Napoli of our topscorer who celebrated his 30th birthday. Halfway the first half Jankovic doubled the score after a cross of Beppe Sculli who played against his former team before the transferperiod in January. With 2-0 halftime arrived. 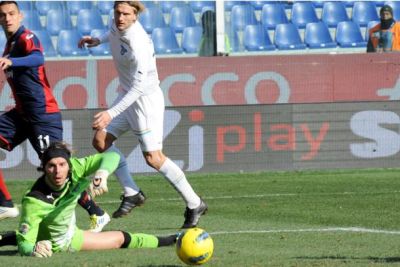 After only 12 seconds in the 2nd half Jankovic scored his second and Genoa’s third goal when his defender Garrido slide down on the half frozen field. Game over with 3-0, not with Genoa! Within 10 minutes Ledesma scored 3-1 out of a penalty (mistake Mesto) and because Genoa refused several times to score the fourth goal the match was again completely open when Gonzalez scored 3-2 in the 89th minute. Happily Lazio already played with 10 men at that moment because of the red card of Diakité, so they could not really give a lot of pressure at the end. Again 3 points to the team of Pasquale Marino.