Today it is exactly 20 years since Genoa-Ajax, the first meeting with Genoa. This birthday deserved a victory today, but also a 5-4 defeat against Inter is memorable. The love of Genoa started with the fans and the atmosphere in Luigi Ferraris, which still is the most important aspect in the relationship with Genoa. Below the article I wrote about the remarkable match 20 years ago in the semifinals of the Uefacup in the season 91-92. 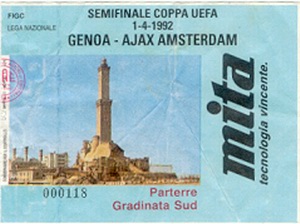 After the check by the police the dream begins: a fantastic completely red and blue coloured English-style stadium with a big yellow bird in front of the opposite site of the stadium (now I know it’s the Griffin) and all the people are constantly singing and very enthusiastic. Of course we don’t understand a word of them, but for the first time in my life I agree with changing my scarve with a supporter of the other team. This is real football-fever …. 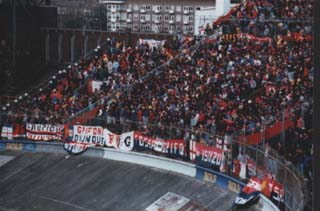