The most important result this afternoon: Lecce-Cesena 0-0. Unless the defeat of Genoa in Milano with 5-4 we are still 6 points ahead of Lecce and we now have 2 matches against the last 2 in the standings: Novara (Saturday 15.00 hours) and Cesena (Luigi Ferraris, 11th April 20.45 hours) in which we have to put Lecce on a bigger distance and save ourselves definitively in this crazy season.

Today after 45 minutes Genoa was 3-0 down by goals of Milito (2x) and Samuel. In the extra time of the first half referee Valeri refused to give us a penalty, but 1 minute later a bycicle kick of Sculli touched Moretti and the halftime score was 3-1. In the second half Palacio realized a penalty: 3-2, but when Zarate scored 4-2 everything seemed over. In the 80th minute Inter goalkeeper Julio Cesar fouled Palacio and got a red card of referee Valerie. Alberto Gilardino scored from the penaltypoint (4-3) and Genoa played with 11 against 10. This was the moment to referee Valeri to help the hometeam: Belluschi touched the ball in the arms of Frey, but Valeri whistled a penalty to Inter and gave Belluschi a red card. Diego Milito scored the penalty: 5-3, game over ? Not yet because on the other side Lucio fouled Sculli in the penaltyarea and the last penalty was (again) scored by Gilardino: 5-4. In the second half Genoa played a good match which gives us hope for the next weeks. 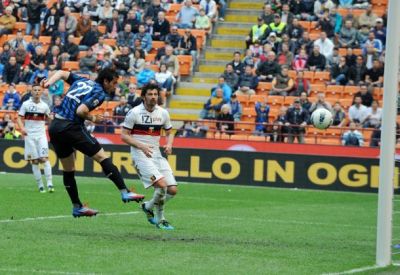