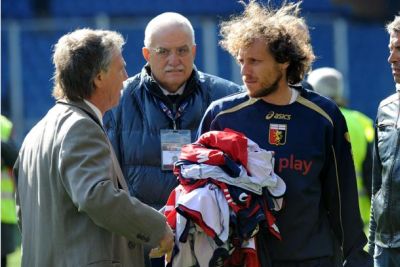 If you don’t play well there is always the risk to arrive in a negative circle with bad results ad bad luck. Against Siena the team of Alberto Malesani played very good in the first 17 minutes and created some chances to open the score. In the 17th minute referee Tagliavento whistled for a dubious fall of our new young defender Alhassan. The freekick of Brienza touched the back of Gilardino and flew directly in the goal of Genoa: 0-1. Our players were shocked, how is this possible: we are the best team in the field, Siena did not even had a shot towards Sebastien Frey and now we are 0-1 down. Only 2 minutes later our rented player Mattia Destro scored the second goal of Siena: 0-2. Just before halftime Brienza scored 0-3 and just after the break Giorgi also scored 0-4. This was enough to a part of the Genoa-fans in Gradinato Nord who came towards Distinti and stopped the match with fireworks ad climbing on the fence. 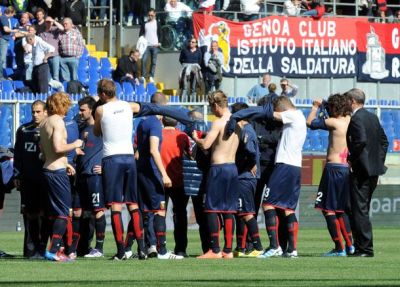 After 45 minutes discussion between the fans and the players Marco Rossi and Giuseppe Sculli the team of Siena and the referee including linesmen arrived again on the field and the last 37 minutes were played in a very strange atmosphere. Siena scored another time, but now in their own goal: 1-4. Because Lecce draw in Roma against Lazio they are now only 1 point behind us while Genoa has to play the last 2 homematches without public. Nobody believes that Alberto Malesani still will be our trainer tomorrow.