Marco Borriello in the 57th minute (header on the crossbar) and Andrea Bertolacci in the 61st minute (saved by Buffon who was already on the ground) were close to the deciding 2-0 in the match against the unbeaten champions of last season. Both players missed, just as Immobile in the 10th minute of the first half but he revanched himself 8 minutes later by scoring 1-0. After the openinggoal both teams were several times close to score and in the 43rd minute the match seemed over to Leonardo Bonuccio who stopped Kucka irregulary after he already had received a yellow card in the 25th minute for making hands in the wall to stop a free-kick of Jankovic. During halftime there was the news that the handball in the wall was made by Pirlo, but he already got a yellow card for protesting against the free-kick. In any case one of these 2 Juventus-players has got 2 yellow cards in the first half, but referee Rocchi saved the black and white like in the old days of Moggi to forget one of the cards at the free-kick. A big shame, but the halftime score: Genoa-Juventus 1-0! 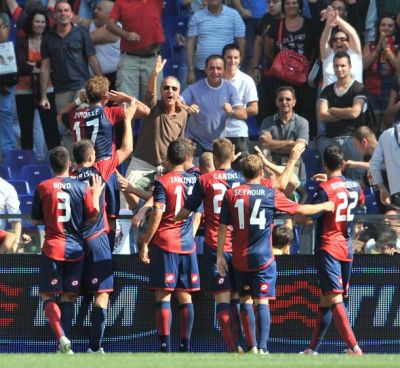 In the 2nd half Juventus started very agressive and did hit the post in the 7th minut before Borriello and Bertolacci missed the mentioned big chances of 2-0. Only 15 seconds (!) after the missed goal of Bertolacci Giaccherini scored in front of Gradinata Sud the equalizer: 1-1. Both teams tried to win the match, but it was a foul of Sampirisi (or great acting of Asamoah) who gave Juventus a penlty that was scored by Vucinic. The same Asamoah scored also the last goal 6 minutes before the end: 1-3, but after the last whistle of Rocchi the fans clapped their hands to the passioned red and blue players. With al little more justice and luck we could beat Juventus.