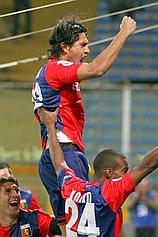 Again a draw: 1-1, with again a goal of Marco Borriello. Genoa played a good match against the team of Mr. Gasperini the coach who brought us in Serie A and in the Europa League. With Palermo our Gasperson plays attractive and offensive football, so it was a very nice match with two teams trying everything to win. Palermo took the lead in the first half by a goal of Giorgi in the 14th minute. Especially Ciro Immobile had several changes to score our equalizer, but he missed. In the 53rd minute it was (again) Marco Borriello who scored our equalizer after an assist of subsitute Jorquera. Also after the equalizer both teams did everything to score the winning goal, but at the end the honest draw of 1-1 still was on the scoreboard. The next match is Sunday 22nd October at 20.45 hours in Marassi against A.S. Roma.