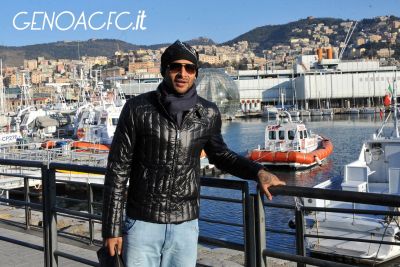 After the victory and good match against Bologna we all hoped the crisis was definitively over. For over an hour in Cagliari it also seemed like that, but after Cagliari made some tactical changes in the field we again lost the match. With Thomas Manfredini for the first time in the line-up the defence was good organised in the first half and just after the break Eros Pisano headed the openinggoal behind the goalkeeper of Cagliari: 0-1. Unfortunately the match changed after this goal and Cagliari scored twice: 2-1. The only big opportunity of Genoa after the goals of Cagliari came in the 93rd minute when Juraj Kucka headed the ball on the crossbar. At that moment Genoa already played 15 minutes with 10 players because Seymour made a stupide foul at midfield. Next week we play in Marassi against Catania and we have to leave again the relegationzone.

This week another ex-player returned with us. After Borriello and Floro Flores now midfieldplayer Rubén Olivera signed again a contract with our club. The player from Uruguay played with us in the succesfull season 2008-2009 in which he scored 4 important goals and we reached the Europa League. Olivera returned from Fiorentina. Besides Olivera this week also Enis Nadarevic arrived of Varese (Serie B) which brings the number of our new players this month on 6. The market is still open till 31st January and probably some extra players will arrive, so there is a revolution in the team.