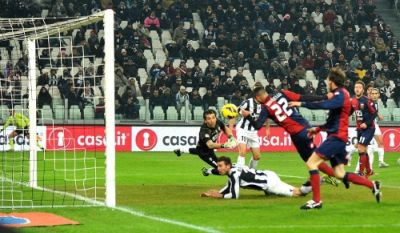 Davide Ballardini had to start with an away-match against nr. 1 in the standings Juventus. Not an easy start of course after the defeats against Cagliari and Catania. In the first half Genoa played very good just as in the homematch against the Old lady. After 9 minutes in the 2nd half Juventus took the lead with a goal of Quagliarella. After the goal Ballardini substituted Manfredini, Olivera and Immobile by Rossi, Bertolacci and Borriello. The substitutions were succesfull at the moment Borriello headed the 1-1 equalizer after a perfect cross of Kucka behind Buffon in the 23rd minute. Only 5 minutes later Floro Flores had to leave the pitch because of an injury, so Genoa had to play the last 20 minutes with 10 players. Of course Juventus was all this time the attacking team, but Frey kept his goal clean. In the last minute of extra time Juventus wanted a penalty because of a handball of Granqvist, but referee Guida refused to give it to the old team of Moggi. All black and white players and staff got completely crazy which leaded to the squalification for the next weeks of: Vucinic, Chiellini, Bonucci, Conte (coach) and Marotta (tecnical director) and a penalty of 50.000 euro. Moggi times are over, forza Genoa ! 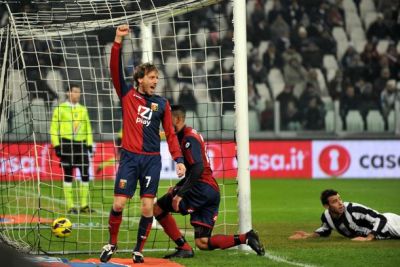